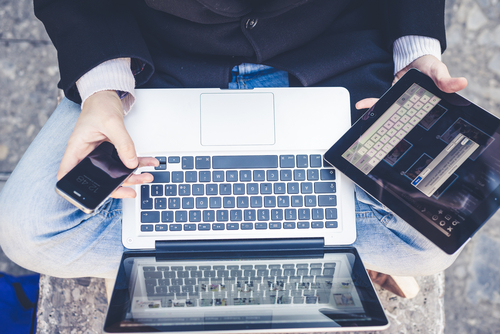 It’s hard to believe, but we are approaching one year since many of us transitioned to remote work. With little notice, we quickly gathered our things from offices and carved out a little corner of our homes that could serve as a workspace until further notice. (Some setups were arguably more successful than others.) Once our physical spaces were set, we then set about trying to cobble together some sense of normalcy and standard of productivity that would carry us through this indefinite change.

As we soldiered through the next year in our “new” offices, much of the time surrounded by distractions courtesy of kids, pets or never ending piles of laundry, it’s fair to say that we may have picked up some less than ideal work habits. The most harmful of which, surprisingly enough, might just be excessive multitasking.

The scenario is all too familiar. You may find yourself in a Zoom meeting and suddenly you’re distracted by a Slack message, your Instagram feed or thoughts about what you’ll make for dinner. Or perhaps you’ve vowed to dedicate some time to finishing a high-value project and you’re suddenly distracted by a deluge of emails, a request for your help on another project, or…what you’ll make for dinner. You may think that you can quickly respond to emails or requests, or jot down a grocery list for baked ziti without missing a beat, but it turns out science just doesn’t support this.

Though “ability to multitask” is often touted as a highly desirable trait, happily brandished on resumes and across LinkedIn profiles, the truth is that none of us are all that great at it. Dr. David Strayer, a professor of psychology at the University of Utah, believes that multitasking is not a skill you can acquire or hone, rather one only a very small subset of people are born with. Dr. Strayer, who has spent the entirety of his career studying attention, conducted research that found only 2 percent of us can actually juggle multiple tasks without significant degradation in  the quality and quantity of our output. Strayer refers to the 2 percent as “supertaskers” and even devised a (fairly grueling) online test to help them self-identify.

Strayer’s work also found it takes up to four times as long to attempt to complete two tasks simultaneously, compared to focusing on one task at a time. Each time you switch from one task to the other it can take up to 25 seconds, and all those pauses can quickly add up to a net loss in productivity.

Even if the average person were able to multitask effectively, there is a cognitive cost in doing so. Multitasking has a unique ability to deplete our energy reserves by way of a phenomenon called “attention residue.” This occurs when you toggle between to-do list items and the spectre of the task you just paused lingers in your thoughts. So even though you may have moved on to your next task, your brain is still contending with the previous one.

Numerous cognitive experts have warned of the negative effects of multitasking. Research from Stanford has shown that when people frequently engage in this behavior, they are training their brains to be scattered as well as limiting ability to be creative or develop emotional intelligence. Another study conducted by the University Of London showed multitasking while performing cognitive tasks lead to significant IQ drops on par with those experienced after skipping a night of sleep.

Despite these negative potential consequences, multitasking is sometimes inevitable, especially during a pandemic. In a time where the boundaries of our personal and professional lives are blurred and there are myriad issues constantly competing for our attention, not all distractions can be avoided. But improving our focus on singular tasks where possible can go a long way toward improving our mental state along with our productivity.

‘Monotasking’ or single-tasking is the antidote to multitasking we should all be striving for. There is no shortage of advice out there on how to build and improve this practice, but some fairly simple steps include making succinct daily to-do lists weighted by priority, blocking time on your calendar for deep work as well as whitespace, filtering out distractions like social media and email, and taking short breaks to rest or meditate when your mind inevitably begins to wander.

One method that many productivity experts swear by is the Pomodoro technique. This method involves setting a timer for 25 minutes, then using that small block of time to focus deeply on a single task. When time is up, take a five minute break. Repeat this cycle four times, then take a longer 15 – 20 minute break before starting all over again. Though it sounds deceptively simple, many have found this technique vastly improves ability to focus on one task at a time.

When it comes to virtual meetings, you can keep multitasking tendencies at bay by closing all nonessential windows. Keep your phone out of reach and out of sight to avoid distractions. Using a pen and paper in lieu of a note taking app or other virtual tool can help simplify things even more.  And make sure to always come prepared with a detailed agenda if you’re the meeting organizer or a bulleted list of questions or concerns if you’re an attendee. The more you’ve prepared ahead of time, the more engaged you’ll be in the discussion as it’s unfolding.

Less multitasking will not only help you reduce stress and increase productivity in the short term, it will also help you prep for an eventual return to the office. Because let’s face it, trying to find the perfect GIF to Slack your coworker in the middle of a budget meeting just won’t fly once we’re back to in-person work. Getting these habits under control now will help ensure the transition back to the physical office is a smooth one.