Remote or return to office? The debate continues. 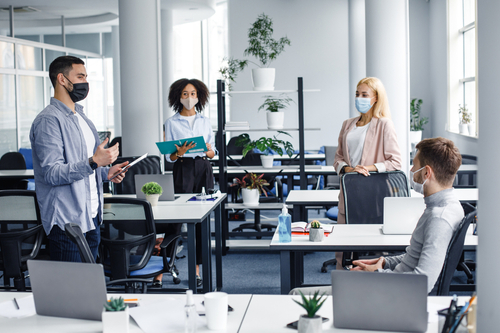 At the height of the COVID-19 pandemic, forty-two percent of the U.S. workforce was working remotely full-time, according to a Stanford University study. Now, as vaccination efforts gain steam (the number of Americans who have received at least one shot is over 100 million, with nearly 58 million, or 17.5% of the population, fully vaccinated), companies who have been working remotely during the pandemic are making their go-forward plans. Much has been said about how the great work from home experiment of the last year could potentially reshape our professional lives as well as our approach to work-life balance, but whether that potential will be realized remains to be seen. As we proceed down what will hopefully be the last leg of the pandemic journey, employers are grappling with how to plan for a post-COVID future.

Over the last year, the biggest question mark around the return to typical office life has shifted from ‘when?’ to ‘if?’ According to a new survey by The National Association for Business Economics, only 11 percent of respondents expect all staff members at their companies to return to their pre-pandemic work arrangements.

Office security firm Kastle Systems shares that about a quarter of employees across the country are currently reporting to offices, either full or part time. Some industries and companies appear motivated to push that number higher. For some, maintaining office space, often in pricey urban centers, remains an integral part of doing business. These employers are of the belief that such shared spaces facilitate collaboration, support professional development and strengthen company culture. Some industries, like finance, have felt the remote work mandate is too far to stretch and that their companies operate more smoothly under a more traditional model. JP Morgan Chase has been vocal about how in-office work creates a synergy necessary for their teams’ effectiveness. Many of their employees returned to the office last September, and summer interns set to report in-person in June to the company’s London and New York offices.

Whatever employers plan, whether employees actually want to return is another question altogether. After a year outside of the daily grind of commutes, drycleaning and overpriced lunch salads, many aren’t so sure they want to return to business as usual. It seems a substantial number of workers may favor a “best of both worlds” approach. A recent survey from workplace technology firm Envoy polled 1,000 full- and part-time US workers and found strong support for a part time return, with roughly half of respondents expressing a desire to return to the office at least a few days a week. Though many expressed concerns about the safety risks of reopening offices, 48% said they would prefer a mix of working from home and in-office work time. Some even stated lack of remote options could be a deal-breaker, with 41% willing to trade a higher salary for the ability to work remotely part of the time, and 47% that would likely leave their current job if their company didn’t offer a post-pandemic work from home option.

A large number of companies have embraced this sentiment, putting in place long term work from home policies. The tech industry is leading the charge here, with a long list of high-profile companies like Twitter, Facebook, Google, Slack, Shopify, Basecamp, Pinterest and many others making remote work a permanent part of company culture. Other companies like Salesforce, Spotify and Ford are also embracing employees’ desire for flexibility by offering hybrid models with a balance of in-office and remote hours.

However companies and employees decide to split time, one thing that is certain to change is the makeup of the physical office. The primary difference may be size, as a new survey of IT decision makers from 541 Research finds that 47% of respondents expect their organizations to reduce their physical office footprint. Some companies who made big investments in elaborate office spaces are now reversing course. REI announced that it is selling its new, still unused 8-acre corporate campus in Bellevue, Washington and Nationwide Insurance plans to downsize from 20 physical offices to just 4.

Those who do maintain office space will ask workers to return to re-imagined environments. Desks spaced six feet apart, plastic shielding and redirected foot traffic patterns will become the new normal. Ford has told workers they will see fewer personal desks when they return, instead they will utilize more multi-purpose spaces shared on alternating schedules.

Overall, it remains to be seen whether the last year has truly sparked the flexible work revolution that many predicted. Through the abrupt shift to a remote environment, we very rapidly opened up to possibilities we may not have otherwise considered, or may have been much slower to adopt. But with vocal proponents on each side of the remote vs. in-person debate, and employees largely falling somewhere in the middle, it’s still too soon to say whether these changes will become a permanent part of our work lives. Sweatpants-clad employees across the country are standing by.