Time to vote: How employers can support their workers on Election Day 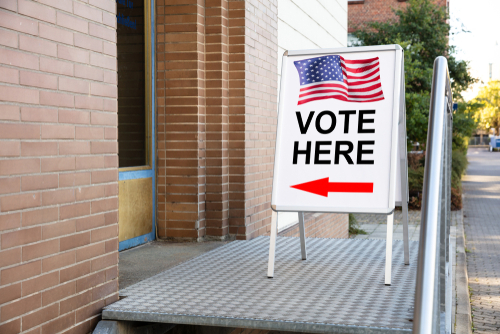 We are just over 40 days out from what promises to be one of the most fraught presidential elections in modern history. And in true 2020 fashion, things are complicated. The coronavirus pandemic has people concerned about the logistics of voting – and with the country’s less than stellar record on voter turnout, those concerns are far from unfounded. Even before COVID, the U.S. had one of the lowest voter turnout rates among developed countries. According to the Pew Research Center, only 56% of those eligible cast a vote in the 2016 presidential election. Since then, the divide between the political parties has grown from a bridgeable chasm to one of Grand Canyon-esque proportions.

While access to voting is top of mind this season, there has long been a call to make election day a national holiday. Most states require employers to allow time off for their workers to vote, however, that time off is not guaranteed to be paid. Though there is bipartisan support for making Election Day a national holiday (in a rare moment of agreement between the parties, a 2018 survey found support from a majority of Democrats and Republicans), congressional efforts to codify it have faltered and no federal bills creating a holiday have yet passed into law.

In the absence of federal action, corporate America has stepped up in a big way. The “Time to Vote” campaign, a nonpartisan movement started in February by Patagonia, Levi Strauss, and PayPal, is encouraging companies to make public commitments to give their employees time off to vote. So far, more than 700 companies have joined the movement, including Starbucks, Best Buy, Gap Inc, J Crew Group, JPMorgan Chase, Lyft, Nike, Twitter and Visa.

There’s a host of reasons why allowing employees paid time off to vote is good policy. Perhaps most importantly, it helps address disparities among who gets to vote. Back in June, thousands of voters in Georgia faced wait times of more than seven hours during the state’s presidential primary, forcing many to leave before they were able to cast their vote. This example is notable because it illustrates how excessive wait times at polling places disproportionately impact people of color. In a 2019 study that analyzed voting wait times during the 2016 presidential election, it was found that polling places where the vast majority of registered voters are Black experience 29% longer wait times than white-majority polling places. Additionally, it found Black Americans were about 74% more likely than their white counterparts to wait more than 30 minutes to vote.

In addition to the social justice implications, paid time off for election day could also help decrease the potential public health impact associated with in-person voting during a pandemic. By decreasing crowds during typical peak times like before and after work, polling places can better adhere to social distancing practices. It can also encourage people to become more involved with the process. Even if employees need only a small amount of the allotted time to cast their vote, or if they voted early or by mail, they can use the time to drive people to the polls or even volunteer as election judges.

LinkUp is proud to join the growing roster of employers who recognize the pivotal role companies can play in upholding our democracy. “The right to vote stands as one of the most fundamental foundations of democracy and as a company, we want to do everything we can to make it as easy and convenient for our employees to exercise their right to vote as possible,” says LinkUp CEO, Toby Dayton. “We’re just a small business, and it’s a tiny step compared to what we should be doing as a nation to increase voter turn-out and expand the franchise, but businesses can play a significant role in helping drive that process forward and we feel it’s important to do everything we can in that regard.”