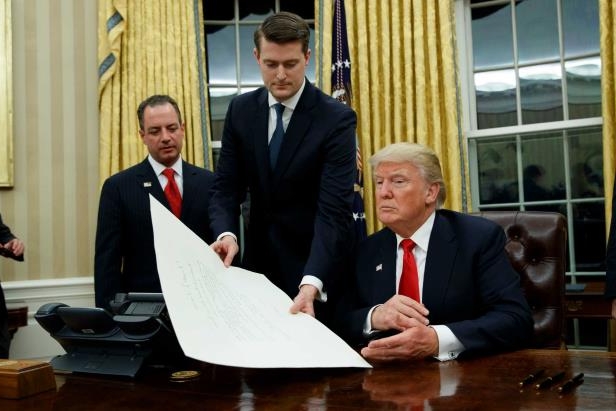 We’ve all heard the nightmarish stories. The ones where an employee harasses at job after job with little to no consequence. It’s boggling how this person maintained — even excelled at — a career!

Didn’t someone complain? Why weren’t they fired? How do they keep getting job offers?

These stories happen everywhere, from small mom-and-pop shops all the way up to the White House. Just yesterday, news broke that a Trump senior staffer was hired despite both of his ex-wives stating that he was abusive and had an order of protection against him.

Of course this problem affects all sides of the political spectrum. Last week Hillary Clinton was criticized for protecting and maintaining employment of one of her political advisers in the past, even after being accused of sexual harassment.

As HR professionals and managers, we strive to screen these folks out during the interview process. Ideally you’d uncover sexual harassers and other toxic employees long before they are welcomed at orientation. However, for many reasons this is easier said than done.

The first problem with identifying harassers is that most victims don’t come forward. This allows harassers to evade consequences in the workplace as well as legally. When victims do come forward, sometimes appropriate action isn’t taken or it’s not considered seriously, especially if there is a power play occurring.

Uncovering the truth can make a us feel like a bit of a detective. And there’s a fine line to follow, considering numerous fair hiring laws that must be followed. One wrong move and you bet you’ll be hearing from the Equal Employment Opportunity Commission (EEOC), even if you had good intentions.

Take criminal background checks, for example. Often used once you narrow your candidate pool, these reports can unveil a host of important data to inform your hiring decision. If a candidate was convicted of a crime, including those related to harassment, it should show up on the report.

However, even the reports are impacted by local and national laws that hiring teams must follow. Some states regulate when exactly you can request to run a background check. Some localities have even joined the Ban the Box movement, eliminating the checkbox on initial applications asking about criminal history. The Federal Trade Commission has specific rules for all employers on how to request a formal background check from an applicant, known as the Fair Credit Reporting Act (FCRA).

Your head may be spinning, but you’ve followed all the rules and you ran a report. Red flag = no hire? Not so fast.

Some states have rules about how far back you can look regarding criminal history. The main reason for this is to eliminate discrimination, which is an honorable consideration. For example, seven years after disposition, release or parole you can’t use this information in Texas if the candidate will make $75,000 a year or less.

This brings up the bigger question: Can people change?

We’ve all done things we’ve regretted in the past. What if someone has accepted the consequences and made a change for the better? I’d argue it depends on the nature of the crime, if it was an isolated or recurring event, and the length of time since last incident. Once you know that information, you can decide if they can be fully considered, or maybe just for certain positions based on responsibilities.

Of course everyone is on their best behavior during interviews, so another simple way to get real insight is to ask all the people who came in contact with the candidate outside of the interview. Ask the receptionist, secretary, shuttle driver and cafe worker how they were treated by the candidate you’re considering. You might be surprised how valuable this insight can be.